Indicia title is "Walt Disney's CORKY AND WHITE SHADOW, No. 707." Code number is CORKY O.S. #707-565. Copyright 1956 by Walt Disney Productions, Inc. Credits for this issue based upon Alberto Becattini's "Disney Index - Dell Comic Books" Vols. 1 and 2 (Italy, 1992 and 1994). First appearance of The Mickey Mouse Club emblem on a Dell comic cover. Adapted from the "Corky and White Shadow" serial that originally appeared on the "Mickey Mouse Club" TV series in 1956. 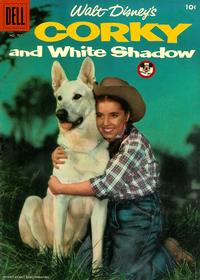 Quiet, White Shadow! I Hear Something! (Table of Contents: 1)

Inside front cover; black and white. One photo with typeset text.

Story continues on inside back cover in black and white (with craftint shading) and concludes on the back cover in color. The last panel is Dell's "A Pledge to Parents." Adapted from a serial originally presented on the "Mickey Mouse Club" TV series in 1956. First Disney comic to be illustrated by Dan Spiegle.