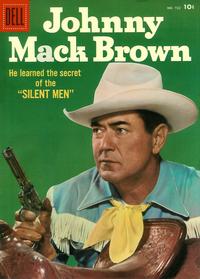 The Rough Riders (Table of Contents: 1)

Inside front cover; black and white. Typeset text and illustrations. Signed CN in the top picture.

The Silent Men (Table of Contents: 2)

Genre
western-frontier
Characters
Johnny Mack Brown; Rebel (horse)
Synopsis
While on his way to visit the Sheriff in Big Horn, Johnny stops at the tiny town of Deer Ford, only to get a cold reception from the townsfolk.

Firfires had a story in FC 685 with JMB, and can be spotted by his motionless, almost sad faces, accurate horses and the peculiar open hands with all fingers parallell, like a fork, as on page 3 and 9. Also to notice is the faces in sideview with small, narrow eyes and half open mouth. Inking seems to be varying, so it could be someone else. He had most of the stories in Gene Autry Comics.

The Good Samaritan (Table of Contents: 3)

Genre
western-frontier
Characters
Johnny Mack Brown; Rebel (horse); Abney Streetch
Synopsis
After the school in Shallow Creek burns, miser Abney Streetch volunteers to provide the funds from his bank account in Great Falls. Johnny goes along as a guard, but on the way back the stage is robbed. Over a period of weeks, the townsfolk raise the money for the school themselves. Streetch volunteers to count the bills and coins, with Johnny standing guard, but Streetch slugs Johnny with the butt of a gun and tries to escape with the town's money, in the climax of an elaborate scheme of fraud that started with the burning of the school.

Dell's "A Pledge to Parents" is the fourth panel on the last page, in the middle of the story.
Edson had many westerns for Dell, like Roy Rogers. He can be recognised by faces with squinting eyes, small hats and horses with high lifting legs with large pointed hooves, pointed ears and a sort of saw tooth outline of the mane. He is credited on JMB by Jerry Bails' Who's Who.

Genre
non-fiction; western-frontier
Synopsis
Facts about the training of horses to be cow ponies.

Inside back cover; black and white. Text with two large illustrations.
Could well be Lenox when looking at the inking and stong legs of the horse, but the line around the nose is not as prominent as expected.