Cover art credits for this sequence from Alberto Becattini (May 14, 2007). 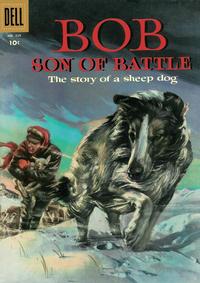 Inside front cover; black and white. Illustrations and text. Pencils and inks credits for this sequence from Alberto Becattini (May 14, 2007). Author of the original book, Alfred Ollivant, is mis-identified on this page as being "Alfred Oliphant".

Story concludes on inside back cover in black and white. Adapted from the 1898 book "Bob Son of Battle" by Alfred Ollivant. Highly abridged version leaves out several characters and some major plot points of the original story. Script, pencils, and inks credits for this sequence from Alberto Becattini (May 14, 2007).

The Sheepdog (Table of Contents: 4)