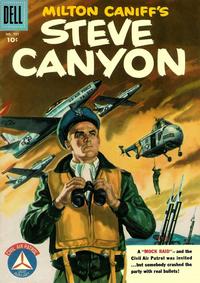 Activities of the Civil Air Patrol (Table of Contents: 1)

Genre
adventure
Characters
Steve Canyon; Tuck O'Tucker
Synopsis
Steve is on a special mission in Tuck's home town air base and takes Tuck along. Tuck joins the Civil Air Patrol. Steve involves the CAP as part of an Air Force training exercise involving secret F-109 jet interceptors. Two spies force down the plane Tuck is in and take its place in a duplicate plane in order to take photographs to sell to a foreign power.

Story continues on inside back cover in black and white and concludes on back cover in color. The last panel is Dell's "A Pledge to Parents." According to Alberto Becattini, Milton Caniff drew and inked Steve Canyon's heads; Ray Bailey did the rest of the art. Pencils, and inks credits for this sequence from Alberto Becattini (May 14, 2007). Script credit is from Paul Newman's record book.