Adapted from the 1961 Walt Disney movie "Babes in Toyland."

No month is given on the cover or in the indicia. Based on the copyright dates of this issue and others in the series released around the same time, one can determine that this issue was published with other Four Color issues bearing a "February-April 1962" cover date. 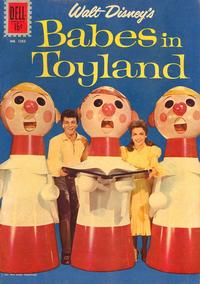 Babes in Toyland (Table of Contents: 1)

Inside front cover; black and white. Six photos from the movie with brief typeset text underneath.

Genre
fantasy-supernatural
Characters
Mother Goose; Sylvester (goose); Barnaby; Mary Contrary; Tom Piper; Bo-Peep; Roderigo; Gonzorgo; Little Boy Blue; The Toymaker; Grumio
Synopsis
In Mother Goose Land, Tom Piper and Mary Contrary wish to wed, but miser Barnaby has Tom kidnapped and Mary's sheep stolen and taken to the Forest of No Return. By doing so he plans to force Mary to marry him. Tom returns and he and Mary go to the Forest of No Return, where they are taken by talking trees to Toyland.
Reprints

Dialogue is written in rhyme. Adapted from the 1961 Walt Disney movie "Babes in Toyland." The movie is a highly-revised version of the 1903 operetta "Babes in Toyland," composed by Victor Herbert with a libretto by Glen MacDonough.

The Dancing Trees (Table of Contents: 3)

Characters
Little Bo-Peep (photo of Ann Jillian) (cameo)
Synopsis
Description of how the tree costumes in the movie were made.

inside back cover; black and white. Text and three production photos.

When Toys Come to Life (Table of Contents: 4)

Back cover. This sequence is replaced by an ad in some copies. See Sequence 5.