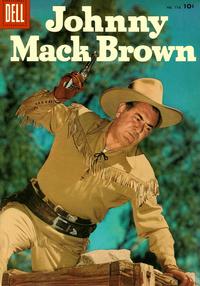 The Riddle Robbery (Table of Contents: 2)

Dan Spiegle is credited on pencils on JMB by Jerry Bails' Who's Who, and can be spotted by his variety of faces, some with potato noses, and often short, stout figures. Not quite certain about inking, but it seems a bit like Ziegler's heavy brushlines.

Inside back cover. Two illustrations.