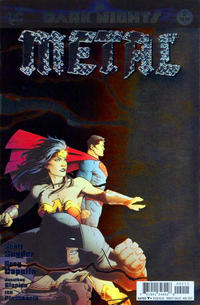 Barbatos has been plotting for millennia to use Batman in his plans, it is mentioned that he first became aware of Batman's existence is when Darkseid's Omega beams transported Bruce back in time, as shown in Final Crisis (DC, 2008 series) and The Return of Bruce Wayne (DC, 2010 series).

2 page title and credits appearing between pages 3 and 4 of the story.