On sale date from list of on sale dates of various Fox comics from inside the front cover. 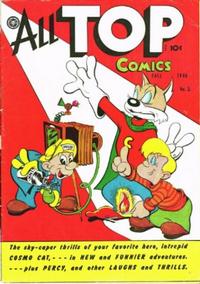 The Fourth Dimension (Table of Contents: 1)

On the first page there is a phone with the dial marked "C-A-I-D-O-6" and a signature in the second panel that looks like it was sort-of whited out and says "E L". "E L" doesn't match any of the creators listed in Jerry Bails' Who's Who.

Includes a character who is a parody of Adolf Hitler.

The Plot to Steal the Seals! (Table of Contents: 3)

One character is a parody of Adolph Hitler.