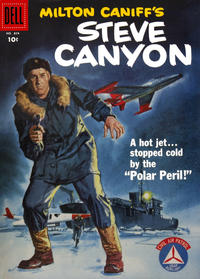 The Dew Line (Table of Contents: 1)

The Polar Peril (Table of Contents: 2)

According to Alberto Becattini, Caniff only drew Steve Canyon's heads, the rest of the art was by Bailey. (May 14, 2007).
According to information in the foreword of "Milton Caniff's Steve Canyon: The Complete Series" (Hermes Press, 2011) #1, Milton Caniff inked the heads of the Steve Canyon character.

First Line of Dialogue or Text
In setting up the Arctic radar bases of DEW line, C-124's or Globemasters played a major role!
Genre
non-fiction; aviation
Synopsis
Facts about aviation equipment used in bringing in material for the DEW Line.

Workhorses of the Arctic (Table of Contents: 4)

First Line of Dialogue or Text
Helicopter on a mercy mission...
Genre
non-fiction
Synopsis
Heavy equipment used in the Arctic.

Back cover. Next to last panel is Dell's "A Pledge to Parents."