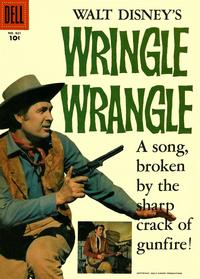 Man with a Guitar (Table of Contents: 1)

Inside front and inside back covers; black and white. Text and photos. Includes two stills from the movie "The Great Locomotive Chase."

The song "Wringle Wrangle" plays an important part in the plot. Indicia reads "Based on the Walt Disney motion picture "Westward Ho, the Wagons!" which was adapted from the novel "Children of the Covered Wagon," by Mary Jane Carr." The comic story is more like a sequel than an adaptation, as it picks up the action late in the movie.

Back cover; text and illustrations.