Indicia title is "TOPPER AND NEIL, No. 859". Code number is TOPPER O.S. #859-5711. "Authorized edition based on characters created by Thorne Smith from the novel "Topper", copyright 1926 by Thorne Smith; renewed 1954 by June Smith Delaney and Marion Smith Connor." This title is partially based on the "Topper" TV series which aired on CBS from 1953 to 1955. In the TV series, Topper had to deal with the ghosts of George and Marion Kerby and the St. Bernard dog Neil, which only he could see or hear. In the comic, the Kerbys don't appear and Neil becomes a talking St. Bernard, who can appear or vanish at will. Topper is still the only one who can hear him talk or see him when he is invisible. 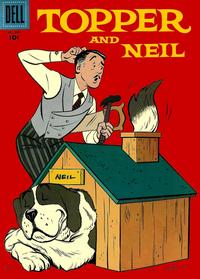 Who Took the Hot Dog (Table of Contents: 1)

Something Fishy (Table of Contents: 2)

Genre
fantasy-supernatural
Characters
Cosmo Topper; Henrietta Topper; Neil
Synopsis
Mr. Schuyler, the president of the Town Bank where Topper works, observes Topper talking to the invisible Neil and decides he needs to take Topper on a fishing trip for some relaxation.

The Wonderful Dubber (Table of Contents: 4)

Genre
fantasy-supernatural; sports
Characters
Cosmo Topper; Neil
Synopsis
Topper is roped into playing Chips Brogan in a golf match. Brogan will donate $25,000 to the club if a member can beat him in a round of golf. With help from invisible Neil, Topper is leading after 11 holes. Then Neil decides its time for a nap.

Genre
fantasy-supernatural
Characters
Cosmo Topper; Neil
Synopsis
Topper tries to get an invisible Neil to sit, but passers-by think he is talking to a statue.

Back cover. One large illustration. An almost identical scene occurs in the story "The Wonderful Dubber" (Sequence 4). Also has Dell's "A Pledge to Parents".