Printed in the U.S.A. Authorized edition, based on the Walt Disney television production "Mars and Beyond," first aired December 4, 1957. Designed by Western Printing & Lithographing Co. Credits for this issue based upon Alberto Becattini's "Disney Index - Dell Comic Books" Vols. 1 and 2 (Italy, 1992 and 1994).
This issue has variants:

Mars and Beyond (Table of Contents) 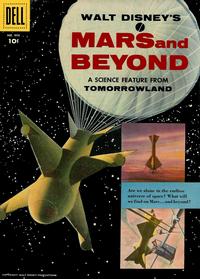 Another Science Factual (Table of Contents: 1)

First Line of Dialogue or Text
Try it!

A Pledge to Parents (Table of Contents: 3)

First Line of Dialogue or Text
The Dell trademark is, and always has been, a positive guarantee that the comic magazine bearing it contains only clean and wholesome entertainment.

Mars and Beyond (Table of Contents: 4)

First Line of Dialogue or Text
As we stand today on the threshold of an exciting new age in which men will travel out into the vastness of space... that greatest riddle of them all looms larger than ever in our speculations... are we alone in the endless universe of space?
Genre
non-fiction
Characters
Shu; Plato; Anaxagoras; Aristarchus; Ptolemy; Nicolas Copernicus; Galileo; Giovanni Schiaparelli; scientists; space travelers; members of the public; Saturnians; sun dwellers; Sir William Herschel
Synopsis
Review of the evolution of life and the development of our astronomical knowledge, along with an imaginative account of an expedition to Mars.
Reprints
Keywords
Mars; space travel

"A science feature from Tomorrowland".

First Line of Dialogue or Text
Did you try the quiz on the inside front cover?
Genre
non-fiction

Answers to the Science Facts Quiz.

The Eighteen-Month Year (Table of Contents: 6)