Brain Boy has a resemblance to actor Robert Vaughn. 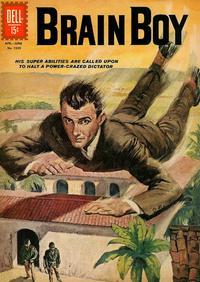 inside front cover; black and white. Illustrations with text beneath.

Genre
spy; superhero
Characters
Brain Boy [Matt Price] (origin); Ricorta (villain)
Synopsis
Matt Price is gifted with incredible psychic powers when his mother is involved in a car crash involving high voltage electric wire while she is pregnant with him. At his senior prom he is approached by a government agent who is a telepath and Matt is hired to work undercover. Nicknamed "Brain Boy," his first assignment is to travel to Xochtan, a small South American country; with Hillary Gomez, a famed classical composer, who had escaped from from Xochtan as a youth. Matt must protect Gomez and himself from Ricorta, the telepath of the dictator General Droz.

According to information in The Comic Reader # 8, March 1962, Al Jaffee did breakdowns for the last 22 pages. Story continues in Brain Boy #2.

Genre
non-fiction
Characters
John Park; William Reed
Synopsis
The case of John Park, who related experiences happening on whaling ships half a world away when he was hypnotized by William Reed in 1850.

Genre
non-fiction
Synopsis
Facts about dolphins and questions about types of animal behavour.