The Trap (Table of Contents) 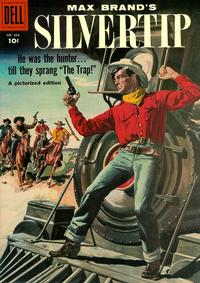 Based on "Silvertip's Trap," by Max Brand. Silvertip is offstage most of the story, which is centered on Bill Naylor. This is sort of a sequel to the story in Silvertip Four Color #835, with the ending scenes of that story becoming the beginning scenes of this one. Duff Gregor, Silvertip's look-alike, is introduced in #835, but Silvertip's arch-enemy is called Barry Christian then, not Sam Fisk.

Back cover, color. Last panel is Dell's "A Pledge to Parents".