The Empty Fort (Table of Contents) 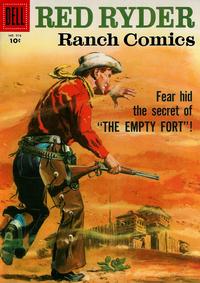 Inside back cover; black and white. Three photos and typeset text.

The Empty Fort (Table of Contents: 2)

Genre
western-frontier
Characters
Red Ryder; Little Beaver; Duchess; Sheriff Newt; Thunder (horse); Papoose (horse)
Synopsis
Red Ryder and Little Beaver find an old prospector delirious with the heat. When they take the prospector to their home, two gunmen arrive and the prospector disappears, along with Little Beaver. Red Ryder goes to Rimrock and the whole town goes out searching for the pair. While they're gone a gang of bandits plunder the empty town.

Originally credited to Fred Harman as it is signed, but he used ghost artists on the comic books. The ghost here is Tony Sgroi. The way Red turns his head in panel three on page two is good enough clue to Sgroi, but there is much more. The elegant horses on page three are Sgroi too, even if he is trying to make them look like Harman-horses. On page six the face of one of the bad guys is another clue, and on page 8 we have the face of Judd Beldon. The closed eyes and high cheekbones are only Sgroi. Page nine has some more Sgroi faces with lines for eyes and a frowning mouth. On page fifteen are some more faces with high cheekbones. Here we also have something he uses very often, the emotion lines round the head. This detail in ink make me think he also did the inking, although with very much blacks to simulate Harman. Art ID by Steinar Ådland December 2010

Where There's Smoke (Table of Contents: 3)

Genre
western-frontier
Characters
Little Beaver; Papoose (horse); Grandma Snapturtle; Chief; Sheriff Newt
Synopsis
Little Beaver finds an injured man in the woods and takes him to the man's cabin. There he finds the man was shot in a robbery and his accomplices keep Little Beaver prisoner in the cabin. Little Beaver is able to send smoke signals by way of the cabin chimney to alert searchers of his plight.

A Hatful of Tricks (Table of Contents: 4)

Genre
western-frontier
Characters
Little Beaver; Red Fox
Synopsis
Peddlers offer the Navaho "white man's hats" in exchange for food and water. The peddlers' ultimate goal is to distract the tribe so they can steal their supply of turquoise.

The last panel is Dell's "A Pledge to Parents."
Sparky Moore is credited to Little Beaver in Jerry Bails' Who's Who, and this is one of his stories. The jagged inking may be his imitation of Harman. The faces in the three first panels on page two points to Sparky, as the close up faces on page four to six. Art ID by Steinar Ådland December 2010

The Walk of the Burros (Table of Contents: 5)

Inside back cover; black and white. Text with 1/3 page illustration.