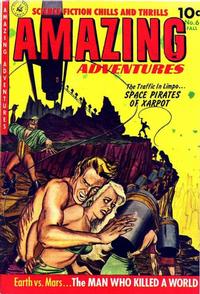 Deal to Die (Table of Contents: 3)

Art ID per Jim Vadeboncoeur Jr. Dresser is credited with Ziff-Davis science fiction stories from 1952 by Jerry Bails' Who's Who.

Station in Space (Table of Contents: 6)

The City of Light (Table of Contents: 7)

Henry Sharp is credited with science fiction at Ziff-Davis in 1950-53 by Jerry Bails' Who's Who, and the artwork is identical to credited stories in "Amazing Adventures" #4 and "Nightmare" #10. He also had many G.I. Joe stories. He can be spotted by his broad grinning faces as on page 2.

Fun in the Future (Table of Contents: 8)

The Man Who Killed a World! (Table of Contents: 10)