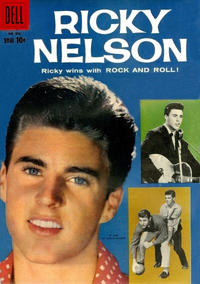 Meet Ricky and his Family (Table of Contents: 1)

Inside front cover; black and white. Three photos and typeset text. One photo is of Ricky as his character in the movie "Rio Bravo," another features Ricky and two members of his band.

Characters
Ricky Nelson; Harriet Nelson; David Nelson; Ozzie Nelson; Carl
Synopsis
A fortune-teller tells Ricky he will meet a redhead who will change his life. He meets the girl, Carlene, who is his friend Carl's cousin. Through a convoluted series of circumstances, Ricky ends up boxing Killer McGurk in an all-comers event. Ricky's secret weapon is that McGurk can't stand rock and roll.

Carlene is supposed to have red hair, but it is colored brown throughout the story.

Characters
Ricky Nelson; Ozzie Nelson; David Nelson; Harriet Nelson
Synopsis
Ricky is working as an attendant at a gas station. A rich girl hires Ricky to pretend to be a French playboy and date her, so that she can get her father to bribe her with a car to dump him.

[Shinguards for Dancing] (Table of Contents: 4)

The last panel is Dell's "A Pledge to Parents."

Inside back cover; black and white. Four photos and typeset text.

Back cover. "Autographed" black and white head and shoulders photo of Ricky Nelson with solid color background and color border.