Escape to Nowhere! (Table of Contents) 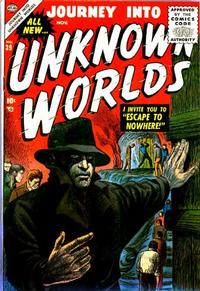 Escape to Nowhere (Table of Contents: 1)

Job Number
G-799
Synopsis
When a slothful man climbs a rope and finds himself in a world where excess labor and noise are punished with death, he escapes back down the rope into his own world, and resolves to turn over a new leaf.
Reprints

The Money Tree (Table of Contents: 2)

The New Gimmick (Table of Contents: 3)

Job Number
G-779
Genre
science fiction
Synopsis
A sci fi writer tries to interest a TV producer three times in a script about life on the moon. The producer fires him because he knows the moon is lifeless. When rocket travel to the moon becomes feasible, the producer gets the idea of filming a TV special of the trip, and when he arrives on the moon he is shocked to find the writer there who says he was born there.
Reprints

The Red World (Table of Contents: 4)

Job Number
G-767
Genre
science fiction
Synopsis
The first arrivals on Mars are surprised to find that Jonathan Swift was there before them.
Reprints

Inspired by the passage in Jonathan Swift's Travels into Several Remote Nations of the World in Four Parts ... by Lemuel Gulliver (1726), in which reference is made to the discovery by Laputian astronomers of two moons orbiting Mars. The two actual moons, Phobos and Deimos, were not discovered until 1877. Note and change of page count from 5 to 4 per Tom Lammers via the Timely-Atlas Group (timely-atlas@yahoogroups.com) April 2010.

Under His Hat! (Table of Contents: 5)

Job Number
G-783
Genre
fantasy-supernatural
Synopsis
An angel who does charitable works refuses to remove his hat until a dying old woman asks him to doff his hat out of respect for a lady. He does so, but only after everyone else has left the room, as he does not want to reveal his halo.
Reprints

The Mystery That Couldn't Be Solved! (Table of Contents: 6)

Job Number
G-788
Genre
science fiction
Synopsis
Scientists send up monkeys into space twice and both times the rocket comes back empty. The scientists draw the erroneous conclusion that space disintegrates physiological matter and give up on space travel, but what actually happened was that the monkeys were taken prisoner by hostile aliens who plan to invade until they realize the monkeys are of limited intelligence. If such creatures could build and pilot a rocket, they reason, the Earth men must have many advanced weapons and so they call off the invasion.
Reprints