The on-sale date is from the publication date recorded in the Catalog of Copyright Entries, Part 2, Periodicals, 1944, New Series, Vol. 39, No. 1. 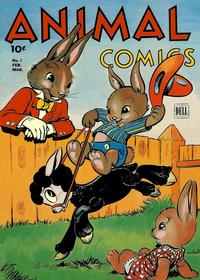 [Puppy versus Goose] (Table of Contents: 1)

On inside front cover in black, white and red.

Little Brother to the King (Table of Contents: 6)

Characters
Joey Jackal; King Leo the Lion; baboons; horseflies; Princess Leona
Synopsis
Joey brown-noses Leo, who then casually calls him "little brother." The baboons mix it up with Joey over, first, Leo's food; second, over Joey's bragging being Leo's little brother; third, over Leo's waterhole; and, finally, after having caught Joey by the tail under a big rock, their plot to roll a big rock on Leo, too. At risk of his own skin Joey warns Leo, so the baboons roll rocks down at Joey, but one rock breaks the big rock holding Joey's tail, freeing him. Leo and his girl, Princess Leona, and Joey rout the baboons, and Leona declares all the jungle will now know Joey's status.

How to Outsmart a Wolf (Table of Contents: 8)

On inside back cover. Including McKean's signature baby chick.

[Monkey Versus Football] (Table of Contents: 11)