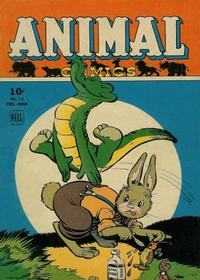 Genre
animal; children
Characters
Bucky Horse (a baby horse); Billy Breeze (the wind, anthropomorphic); Molly Mare (Bucky's mother)
Synopsis
Bucky discovers how to lift the pasture bars off with his teeth and walk through the gap into the farmhouse yard. He has fun pulling clothespins from the washline until a sheet is suddenly blown over his head, blinding him. Terrified, he races blindly off the bluff and falls into the river. Swimming desperately, and confused, he squeals MAMA! Molly comes, pushes him to shore. Lesson learned: Bucky never pulled clothespins again!

On inside front cover (Cover #2, or C2, whole) in black, white and red. Writer credit per Du Bois Account Books.

[Helping the Homeless] (Table of Contents: 2)

First Line of Dialogue or Text
What a grand day for an adventure---if only my rheumatism weren't so bothersome.
Genre
anthropomorphic-funny animals
Characters
Uncle Wiggily Longears (a rheumatic rabbit); Robert "Bob" Raccoon; Mama Raccoon; Junior Raccoon; Child Raccoon; Baby Raccoon; Alligator; Mrs. Groundhog; Mr. Savage Owl; Buggsy Bug
Synopsis
Robert Raccoon tells Uncle Wiggily an owl drove his family from their cozy home in the hollow tree. Mama sobs he ate one of her children. Wiggily is fooled by a sign for a gypsy inn; Junior warns him it's an alligator! Mrs. Groundhog accepts the family at her inn. Bob takes Wiggily in the baby cart (because Wiggily's rheumatism) to attend to Owl. Buggsy joins them at the tree home, Wiggily frees him from many sticky things. A sticky device traps "cannibal" Owl. Wings, talons clipped! All's well. Buggsy's sticking with Wiggily!

First Line of Dialogue or Text
Come along, Hector!
Genre
anthropomorphic-funny animals
Characters
Hector the Henpecked Rooster; Mrs. Bertha Henpeck; Herman
Synopsis
Hector fakes his death to get back at his wife.

Albert the Whaler (Table of Contents: 5)

First Line of Dialogue or Text
Hey, L.B., not so fast!
Genre
anthropomorphic-funny animals
Characters
Eddie Elephant [E.E.] (a talking stuffed toy elephant); Little Brown Bear [L.B.] (a talking stuffed teddy-bear); Quacky Doodles (a talking wooden toy duck); three wooden ducklings
Synopsis
Rollerskating, L.B. exhorts Eddie to speed, who demurs, comments he isn't built for it, sits on a log, removes the skates, tosses them, hitting Quacky who sits on her eggs. She leaves Eddie in charge, going for groceries. The ducklings hatch, see L.B.'s skates, return to their shells, regrow their legs and feet as wheels, lead the boys a merry chase on the water. Catching 'em in the overturned canoe, the boys see Quacky returning, angry. Ducklings skate off, Quacky weeps she can't catch 'em. Eddie gives her his skates, solving her problem, and his!

Toy wooden ducklings hatch from eggs? Then return to their shells to regrow their wooden legs and feet as wooden wheels? This is the elf-land of make-belief! But elf-land has internal rules, so when Quacky has no wheels for feet by which to catch her children, it isn't stated, but the logic is implicit why she can't likewise morph herself: not being newly hatched, she hasn't an eggshell to return to for regrowth. Her problem provides Eddie the opportunity to be of further assistance (he has already helped her by sitting on her eggs for her when she leaves for groceries). Barrier puts it this way in Funnybooks (UC Press, Oakland, 2015), p.126: "...what happened in his stories [were] plausible on the stories' own terms." Plausibility "in which sympathetic characters support one another."

A Friend in Need (Table of Contents: 9)

Characters
Philip (a boy); Tuck (his big Airdale); Patsy (the kitten); Philip's mother
Synopsis
Philip and Tuck leave Patsy alone in the house. She playfully knocks over a box of matches to the floor. They spill. One by one they ignite. The curtains catch fire. Patsy meows for help. Tuck scratches through the screen door, picks Patsy up by her nape, and delivers her to safety outside as Philip and Mother attend the fire. Patsy and Tuck play.

On inside back cover in black, white and red. Writer credit per Du Bois Account Books. Du Bois's story's title articulates the theme of friendship in so much of his work.