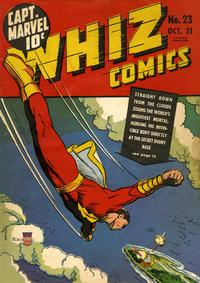 The Bal Masque (Table of Contents: 1)

Genre
superhero
Characters
Captain Marvel [Billy Batson]; Whitey Murphy; Sterling Morris; Lulette (introduction); Velox (dancer, introduction); Costanza (dancer, introduction); Sir Roger Fittz-Down Chipley [as Armond] (introduction)
Synopsis
Billy and Whitey return from their adventure in Guatemala (where they battled the Mayan monkey-god) and receive a note from Mr. Morris to meet him in Washington D.C. in regards to a secret mission. They are instructed to meet the radio station owner at a masked ball, and he introduces the pair to the ambassador and his daughter. The daughter doesn't realize that her ring contains a secret code, and that is what Captain Marvel must protect until it's delivered to the proper officials.
Reprints
Keywords
Shazam

[The Man Who Bet the Ranch on Golden Arrow] (Table of Contents: 2)

[Hunt for the Sea Raider] (Table of Contents: 4)

First Line of Dialogue or Text
Do we or don't we get the job?
Genre
humor; children

First Line of Dialogue or Text
Dr. Voodoo has been thrown back through the centuries to recover the legendary Golden Flask, said to give its owner fabulous wealth and power.
Genre
jungle
Characters
Anita; Nero; Herculo Svenson (villain); Doctor Voodoo [Hal Carey]
Synopsis
Hal and Nero catch up to and board Svenson's ship. They make their way to the cabin where Anita is being held and then are set upon by the pirates.
Keywords
fencing; Golden Flask; pirates; rain; sailing ships; storms; time travel

[Sacrifice to the Angry God] (Table of Contents: 8)

Story continues in next issue.