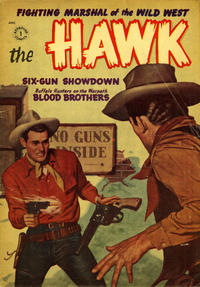 The Law of the Colt (Table of Contents: 1)

Pencils originally credited to John Buscema. Barry and Anderson are credited by JVJon at Digital Comics Museum.
The horse's head of Buscema is much shorter and broader than here, as can be seen in Roy Rogers #80. Buscema had stiffer people and very close fitting costumes this early, which can also be seen in Roy Rogers. Notice the head of the girl on page 3, especially the inking of her hair with many short penlines, and you have Murphy Anderson. Dan Barry and Murphy Anderson are both credited to this series in Jerry Bails' Who's Who.

A Fair Exchange (Table of Contents: 3)