The Witch Doctor (Table of Contents) 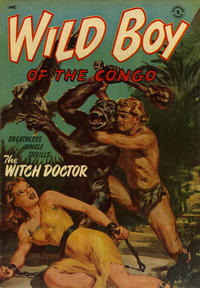 The Witch Doctor (Table of Contents: 2)

Paul Hodge is credited to Wild Boy on pencils and ink by Jerry Bails' Who's Who, and compared with signed work in various Marvel comics, this must be him, as the other possible, Frank Kramer credited by Vadebonceur to some other Wild Boy stories is quite different. The eyes here are placed far apart, and the ears are special and identical to signed Hodge art. Also the sideview of the face of the witch doctor compare favorable with Hodge work. His work has many similarities with Charles Raab, but Raab is not credited to Wild Boy.

Genre
non-fiction
Synopsis
Some of the over two thousand volcanic eruptions in recorded history.

Becker is credited to work in Wild Boy by Jerry Bails' Who's Who, and it could be him when looking at faces and inking.

Star of the Jungle (Table of Contents: 4)

Same art as the preceding story.

Fire When Ready (Table of Contents: 5)

Irv Novick and Bernard Sachs are both credited to "Joe Barton" by Jerry Bails' Who's Who, and the faces in close up looking backwards, and with arched eyebrows are like Novick's work. The inking by Sachs match his credited work in early "Mystery in Space" #3.

The Return (Table of Contents: 7)

Genre
jungle
Characters
Wild Boy; chief of the Kowi tribe; Jogo (his nephew) ; Koller (Jogo's white friend)
Synopsis
The chief's nephew, Jogo, returns to the jungle to drive a diamond mine that only brings misery to his people.
Reprints

Same art as on the other Wild Boy stories in this issue.