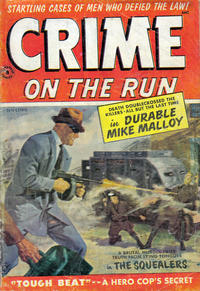 A Tough Beat (Table of Contents: 1)

Starr is credited on both pencil and ink on crime stories for St.John by Jerry Bails' Who's Who.He can be spotted by his faces, with quite broad mouth. He had most of the Bantam Buckaroo stories for ACG.

The Squealers (Table of Contents: 3)

Originally credited "Louis Ravelli?", but faces with bushy eyebrows drawn with lines perpendicular is a sure sign of Olesen, as can best be seen at the last page. He had many western stories of The Hawk for St.John. He is also credited on crime stories for St.John by Jerry Bails' Who's Who.