Fable of Venice is regarded as a tribute by Hugo Pratt to his home town. The single Corto Maltese story was first published in 1977 and is set during the year 1921. Guido Fuga contributed with artwork of backgrounds of Venice.

The story is divided into four chapters: "The Hermes Lodge", "The Enigma of Baron Corvo", "The Stairway of Encounters", and "The Revelations of Saint Mark".

First published in Italy in the weekly supplement of L'Europeo, from #21-22 of 3 June 1977 to #51 of 23 December 1977 with the title "Fiaba de Venezia" and with colors by Mariolina Pasqualini. The first publication as an Italian album had the title "Sirat al Bunduqiyyah", which is Arabic for "Story of Venice". The Italian title was later changed to "Favola di Venezia - Sirat Al-Bunduqiyyah", or only "Favola di Venezia". First published in French in the monthly magazine (À Suivre) from #12 January 1979 to #15 April 1979 as "Fable de Venise (Sirat Al-Bunduqiyyah)".

Fable of Venice (Table of Contents) 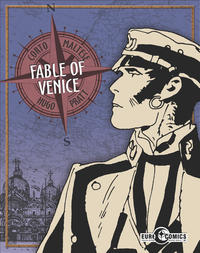 First Line of Dialogue or Text
This series at long last affords Hugo Pratt's masterpiece an American edition presented in the original oversized black-and-white format in which Pratt created the work.

Inside facing half of front gatefold cover. Contains a brief description of the story in the volume and an uncredited old photograph of the Maritime Arsenal in Venice.

Reverse side of front gatefold cover (repeated on the reverse of rear gatefold cover). Historical map of central Venice, the setting for the story.

Fable of Venice (Table of Contents: 3)

Chapter One: The Hermes Lodge (Table of Contents: 4)

Title page with spot illustration taken from within story. Blank reverse side.

The Hermes Lodge (Table of Contents: 5)

First Line of Dialogue or Text
For a title, take your pick...
Genre
adventure; historical
Characters
Freemasons; Corto Maltese; Bepi Faliero; Stevani; Boselli; The Poet; Hipazia; Böeke; Silver Leg
Synopsis
Corto falls through the roof a masonic lodge in Venice. The freemason Bepi Faliero accompanies him through the streets of Venice, and Corto tells that he is in Venice looking for an emerald called "Solomon's Clavicle". They meet a group of fascist Blackshirts led by Stevani, their argument is interrupted by The Poet (based on Gabriele D'Annunzio). Faliero invites Corto to meet the Neoplatonic philosopher Hipazia.

Chapter Two: The Enigma of Baron Corvo (Table of Contents: 6)

Title page with spot illustration taken from within story. Blank reverse side.

The Enigma of Baron Corvo (Table of Contents: 7)

First Line of Dialogue or Text
There was everything in the garden of Eden...
Genre
adventure; historical
Characters
Corto Maltese; Böeke; Bepi Faliero; Schulz; Melchisedec; Stevani; Boselli
Synopsis
Corto proceeds to the Maritime Arsenal and examines Scandinavian runes engraved on a Greek lion statue, and visits the scholar Melchisedec in the old ghetto. Bepi Faliero visits Stevani. Corto hears gunshots and finds Stevani wounded in his house. Blackshirts and Carabinieri arrive, and Corto flees to the roofs of Venice.

Chapter Three: The Stairway of Encounters (Table of Contents: 8)

Title page with spot illustration taken from within story.

The Stairway of Encounters (Table of Contents: 9)

First Line of Dialogue or Text
Maybe I can climb down from this terrace...
Genre
adventure; historical
Characters
Corto Maltese; Saud Kalula; Louise Brookszowyc; Böeke; Silver Leg; Freemasons; Dr. Teone; Hipazia
Synopsis
Corto falls from a roof and meets the spirit Saud Kalula in a dream. The spirit has the face of Rasputin. Corto wakes up in the care of Louise Brookszowyc and is visited by Böeke and Silver Leg. Later, Corto goes to the Freemasons and meets Dr. Teone, father of Hipazia.

Chapter Four: The Revelations of Saint Mark (Table of Contents: 10)

Title page with spot illustration taken from within story.

The Revelations of Saint Mark (Table of Contents: 11)

Reverse side of rear gatefold cover (repeated from reverse of front gatefold cover). Historical map of central Venice, the setting for the story.

First Line of Dialogue or Text
Hugo Pratt (1927-1995) is considered one of the great graphic novelists in the history of the medium.

Inside facing half of rear gatefold cover. Biography of Hugo Pratt and an uncredited photograph of Hugo Pratt in St. Mark's Square, Venice, in the late 1960s.