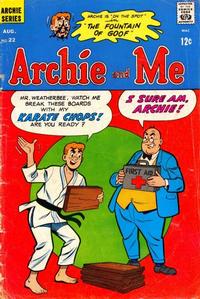 Genre
humor; teen
Characters
Archie Andrews; Veronica Lodge
Synopsis
Archie is riding his bike and instead of paying attention to where he's going, is too busy staring at Veronica, who is sitting on the curb nearby. Archie almost runs into an oncoming car as they both slam on brakes, which sends Archie over the handlebars and onto the hood of the car. Archie says it's a lucky thing he had good brakes and that his were Bendix. He asks the driver what kind of brakes he had and the driver, very annoyed, also says that his car has Bendix brakes. In the last panel, Veronica gives the readers a brief safety lesson.

Ad appears on the back of page 8 of "Karate Kraze" and occupies the top half of the page. Bottom half is an ad for a 10-way hairpiece. No credits are given, but artwork is clearly that of Harry Lucey. See http://en.wikipedia.org/wiki/Bendix_Corporation for more information on Bendix.

Genre
humor; children
Characters
Li'l Jinx Holliday; Greg
Synopsis
Li'l Jinx and her pal Greg are walking through town doing typical kid things - "leap-frogging" over a fire hydrant, walking along the top of a fence, etc. As they walk along, Greg asks Li'l Jinx if his dad ever spanks her. She says "You bet he does!", and Greg asks if Li'l Jinx's mom ever spanks her. Li'l Jinx replies "Certainly!". Greg then asks her who hurts the most, and Li'l Jinx replies "Me!"

Another sign of how things have changed. These days there are a lot of people who believe that you shouldn't spank your child. The editors would probably not be brave enough today to try this kind of a gag - some people might not like the fact that they're promoting spanking...

An ad offering readers a free issue of Archie's Pals 'n' Gals when they sign up for a 4-issue subscription for $1.

The Fountain of Goof (Table of Contents: 5)

Genre
humor; teen
Characters
Archie Andrews; Geraldine Grundy; Jughead Jones; Coach Kleats; Reggie Mantle; Waldo Weatherbee; un-named psychiatrist
Synopsis
Mr. Weatherbee and Coach Kleats race around the track to prove that one of them is fit. While the race is going on, Archie gets ink on Mr. Weatherbee's coat, which he replaces with a bigger coat while the first coat is cleaned.
Reprints

There is a 4-page gap between pages 7 and 8 of this story. Page 7 is on the left, followed by a full-page ad for the Popsicle Pan-American contest [entrants must correctly identify the three countries for the flags shown and design their own flag; 3 grand prize winners would receive an American Motors AMX and a week for 2 in San Antonio via American Airlines]. The next two pages are the Archie Club News feature with an offer to join the Archie club. On the back of the 2nd page of Archie Club News is an ad for Cheerios. Following that, the story continues. The ad is indexed after the story because the story is continuous and not a multi-part story.

It is assumed that the blizzard described in the article took place in 1968, although the indexer was unable to find proof of this. This feature appears between two ads (one on the front of the left page and one on the back of the right page), right in the middle of the "Fountain of Goof" story. Bottom half of the second page was the usual offer to join the Archie Club, which cost 20 cents at the time.