Crime Mystery of the Month (Table of Contents)

Cardy is credited on covers on this series by Jerry Bails' Who's Who. A small signature on the nearest building. Jim Vadeboncoeur, Jr. has Cardy as artist here. The signature looks like an underlined Vic or NC. 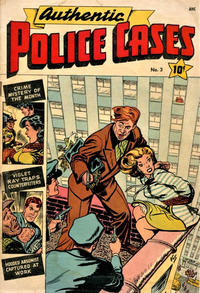 The faces with special hard set mouth in profile, the man with glasses, sharp eyes and the eyebrows of the females are all identical to Cavallo's signed story in Wings Comics #68. He is credited on this feature by Jerry Bails' Who's Who.
Jim Vadeboncoeur, Jr. has "Tuska ? Page 1", but only the two faces of the bad guys resemble him, the face of the girl is like Cavallo and the rest of story.

Art much in common with the Scoop Daily story. Compare the sharp eyes and eyebrows and hard bitten mouth, and also the face of the ladies. It could be Cavallo, but a bit sharper inklines here. He is credited on this feature by Jerry Bails' Who's Who.

The White Death (Table of Contents: 4)

Broad male faces looking a bit "well fed" are signs of Ricca. The only signed artwork by him are some covers that are a little different from all the storíes credited to him, but Jim Vadeboncoeur, Jr. has him on this one.

Lessons in Larceny (Table of Contents: 5)

Some faces with sharp eyes and long eyebrows are very similar to Cavallo's signed story in Wings Comics #69.