Bee is a pen name of Lubbers (Jerry Bails' Who's Who). 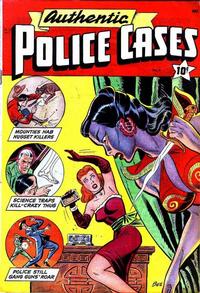 The Two-Gun Terror of Mohawk Valley (Table of Contents: 1)

Hart is credited on this feature by Jerry Bails' Who's Who, and heads in 3/4 backview are identical to his stories in Black Fury Comics (Charlton), as are the movement of hands, and also the big eyed youngster, Kip.
This may be a hitherto unpublished K-9 story, as it does not appear to be reprinted from a Chesler / Dynamic comic.

Monument to Death (Table of Contents: 4)

How the "Masked Blackjack" Proved His Innocence (Table of Contents: 5)

Murder On Ice (Table of Contents: 6)