The Greatest Super-Heroes of All Time! (Table of Contents) 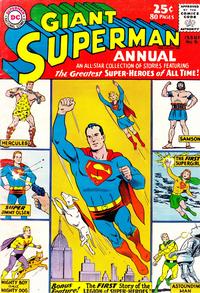 Synopsis
Description of characters on pin up from the back cover of this issue.
Reprints

The First Supergirl! (Table of Contents: 4)

Genre
superhero
Characters
Superman [Clark Kent]; Lois Lane; Super-Girl; Jimmy Olsen; Totem Spirit
Synopsis
Jimmy Olsen is given the gift of a magic totem bestowing 3 wishes on the owner, he uses one wish to give Superman a super companion - Super-Girl. But she turns out to be more of a nuisance than a helper.
Reprints
Keywords
flying newsroom; green kryptonite; magic totem

This Super-Girl is colored differently (a redhead in an orange and green costume) in this reprint to distinguish her from Supergirl (Kara Zor-El), who had not yet been created when this story first appeared.

This Super-Girl was a try-out to gauge reader reaction to the character.

The caption on the splash page is redone, and the last panel on page 10 was removed from the original and replaced with a mention of the current Supergirl.

The Debut of Supergirl (Table of Contents: 5)

No title given on actual page but is listed as "The Debut of Supergirl" on the contents page.

The Legion of Super-Heroes (Table of Contents: 7)

There are several other unidentified Legionnaires in the story. The Legionnaires are not yet in their classic costumes in this story. Cosmic Boy is using "magnetic eyes."

The Mystery of Mighty Boy! Part I (Table of Contents: 9)

The Superman of the Past! (Table of Contents: 11)

Genre
superhero
Characters
Superman [Clark Kent]; Samson [also as Merrio]; Lois Lane; Jimmy Olsen; Perry White; Caesar; Helene
Synopsis
Lois Lane is whisked back in time and agrees to marry Samson but returns to her own era in the nick of time, or was it all a dream?
Reprints
Keywords
dream; time travel

The Superman Family (Table of Contents: 14)

This is on the back cover of this issue.

There is an opinion that the Lois and Lana heads might be redrawn or inked by Kurt Schaffenberger, but there was no consensus on this when discussed on the GCD lists.