Includes 10 pages of paid advertisements. The on-sale date is the publication date reported in U.S. Copyright Office filings.
This issue has variants: 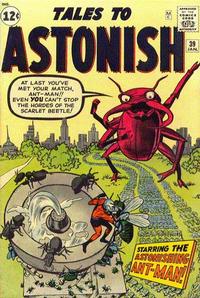 The Vengeance of the Scarlet Beetle! (Table of Contents: 1)

The Remedy Oil (Table of Contents: 2)

Job Number
J-984
First Line of Dialogue or Text
All of the fancy clothing stores on Main Street were doing a...
Genre
science fiction
Characters
Mrs. Gerrity; Tom Gerrity; Officer O'Malley; Logarithm
Synopsis
An old-fashioned shopkeeper unwittingly saves the life of a boy from Mechanica when her remedy oil lubricates the gears in his brain.
Reprints

Ozamm the Terrible! (Table of Contents: 3)

First Line of Dialogue or Text
Surrender, Earthlings!
Genre
science fiction
Characters
Ozamm; Joe Baxter
Synopsis
A factory worker laid off to be replaced by a machine foils a seemingly invincible alien by cutting off his power source.
Reprints

The Toy Soldiers (Table of Contents: 4)

First Line of Dialogue or Text
How can anyone possibly dream up a fantasy story as simple as a few toy soldiers?
Genre
science fiction
Characters
Billy Barton; Zogg
Synopsis
A boy who enjoys toy soldiers buys a new civil war figure to place in his prisoner of war stockade. That evening, he and his father are attacked by an invader from the sixth dimension. Suddenly, the lights go out, and when they turn the lights back on, the invader has disappeared. They chalk it up to some sort of unusual shared dream, and go back to sleep. The following morning when the boy wakes up and peers into his model stockade, he sees the invader languishing in the cell guarded over by the toy soldier.
Reprints