Superman has a yellow "S" on blue triangle on his cape. Art credits verified by Fred Ray. 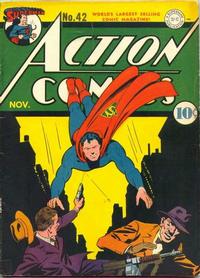 Genre
superhero
Characters
Superman [Clark Kent]; Perry White; Lois Lane; Jimmy Olsen [cameo]; Carl Bransom; Nick Flaerty; John Standing; Freeman Chase; Luthor [as Zytal] (villain, bald); Jake Mobray (villain, death) Dirk Chadwick (villain, death)
Synopsis
A series of strange disappearances of prominent men in the city of Metropolis makes Clark Kent believe the kidnappings weren't under ordinary circumstances. When, as Superman, he tries to get information from local mobsters, they are suddenly destroyed by a ray out of the blue. He later discovers that Luthor built a giant city in the sky, and the arch for then hypnotizes Superman into doing his bidding.
Reprints

[The Origin of the Vigilante] (Table of Contents: 5)

Genre
historical
Characters
The Black Pirate [Jon Valor]; Bonnie; unnamed cutthroats (villains)
Synopsis
A cutthroat pretends to be an escaped fugitive to get close to Jon Valor. Bonnie is suspicious, however.

Strip is continued in Sensation Comics #1.

Genre
adventure; aviation
Characters
Three Aces [Fog Fortune; Gunner Bill; Whistler Will]; Miguel Miranda (villain)
Synopsis
On their way back from South America, the Aces find themselves in the middle of a Central American revolution. A man named Miguel Miranda takes their planes for the war, and the Aces have to figure out a way to get them back.

Superman Is in the Movies! (Table of Contents: 9) (Expand) /

Genre
superhero
Characters
Mr. America [Tex Thomson]; Fatman [Bob Daley] (origin as Fatman); The Queen Bee (villain)
Synopsis
Mr. America goes out to investigate a strange lack of crime, but Bob is ordered to stay in. Feeling deserted, Bob creates the identity of Fatman. At Tex's headquarters, he develops a way to transform his cape into a magic flying carpet. Fatman stumbles upon the plans of the Queen Bee to steal radium.

Dead or Alive (Table of Contents: 12)

First Line of Dialogue or Text
He won't drop them...
Genre
humor

First Line of Dialogue or Text
Blazing a path through miles of treacherous jungle-land on his way to the coast, Congo Bill signals his safari to halt.
Genre
jungle
Characters
Congo Bill; Sheila Hanlen; Professor James Kent; Hugo Von Eller; Winters; Tomkins (villain)
Synopsis
In the jungle, Congo Bill's safari comes across a white man being buried alive by a native and attempts to stop him, only to be informed that he's just ruined a shot in an adventure film. Talking with the director, Hugo Von Eller, Bill finds out that the production has been plagued with problems. Sheila agrees to stand in for a sick actress, but the problems continue.
Keywords
caves; dynamite; ivory; lions; motion picture cameras; motion picture projectors; motion pictures; shovels

New Films for Your Superman Krypto-Raygun (Table of Contents: 19) (Expand) /

[The Man Who Could Control Minds] (Table of Contents: 23)

Genre
adventure
Characters
Zatara; The Tigress (villain); Frosty Parke (villain)
Synopsis
Zatara spots the Tigress and Frosty Parke and decides to follow them. He catches them trying to rob a bank and quickly stops them, putting Frosty into the hospital. There, Frosty uses an experiment that allows him to control men's minds, and somehow the power is transferred into him. He escapes and meets with Tigress to continue their crime spree. Zatara discovers Frosty's new power and investigates.