the Four Ages of Conan. From Conan the Boy to Conan the King. (Table of Contents) 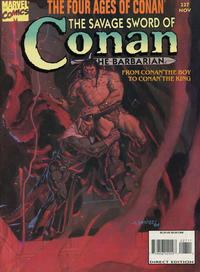 Day of Manhood (Table of Contents: 1)

Genre
sword and sorcery
Characters
teenage Conan
Synopsis
To prove himself a man, a teenage Conan must endure a test of strength and defeat a rampaging bull.
Reprints

Adaptation of a poem by Jim Neal. It is also a sequel to the story "Gem in the Tower" by L Sprague deCamp and Lin Carter done in SSoC #45.

A Horror of a Different Color (Table of Contents: 3)

Freely adapted from the story "the Damned Thing" by Ambrose Bierce.

the Phoenix in the Shadow (Table of Contents: 6)

Genre
sword and sorcery
Characters
King Conan; Thoth-Amon
Synopsis
King Conan and his men travel to the palace of Aquilonia and must pit themselves against the sorcery of Thoth-Amon.
Reprints

This story is a sequel to "the Phoenix on the Sword" by Robert E Howard.