The Man Who Discovered Superman's Identity! (Table of Contents) 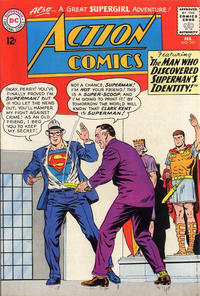 The Man Who Betrayed Superman's Identity! (Table of Contents: 2)

First Line of Dialogue or Text
Yaah! I hit him with that snowball!
Genre
humor
Characters
Little Pete

[Statement of Ownership, Management, and Circulation] (Table of Contents: 4)

Strange Sports Stories Is the Most (Table of Contents: 5) (Expand) /

The Brave and the Bold; Strange Sports Stories / promo (ad from the publisher) / 1 page (report information)

The Forbidden Weapons of Krypton! (Table of Contents: 7)

story continued in the following issue

Genre
advocacy
Characters
Dick
Synopsis
How to treat frostbite, a black eye, and does cutting your hair make it grow faster?

Published in cooperation with the National Social Welfare Assembly.
Previously appeared in some November 1962 DC titles; later appears in May 1966 titles.

First Line of Dialogue or Text
I can do great things for your circus.
Genre
humor
Characters
Tricksy
Reprints