The Four Faces of Sgt. Rock! (Table of Contents) 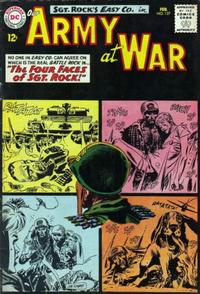 "Published as a public service in cooperation with the National Social Welfare Assembly, coordinating organization for national health, welfare and recreation agencies of the U.S."

Second of a three-part booklength story.

First Line of Dialogue or Text
Statement Required by the Act of August 24, 1912

"The average number of copies of each issue of this publication sold or distributed, through the mails or otherwise, to paid subscribers during the 12 months preceding [October 1, 1962] was: 180,000. J.S. Liebowitz, Business Manager"

Fortitude and Courage... Battle Story of the 104th Infantry Regiment (Table of Contents: 11)

Conclusion of a three-part booklength story