The on-sale date is the publication date reported in the U. S. Copyright Office filing. The filing states Detective Comics, Inc. is the copyright holder and publisher. 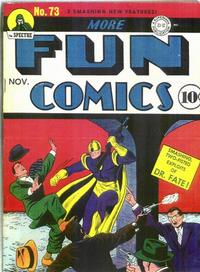 Genre
superhero
Characters
Doctor Fate [Kent Nelson]; Butch; Mr. Hadow (billionaire); Mr. Who (introduction, origin)
Synopsis
Dr. Fate faces the threat of a new criminal called Mr. Who, who has created "Solution Z", with which he can grow to a tremendous size and become invisible. Fate must stop him from seizing the famed Almond Diamond.
Reprints
Keywords
Solution Z

Fate wears half-mask. The series takes a pretty strong change in direction at this point, as Dr. Fate acts as a traditional super-hero, punching and wisecracking, rather than spouting on about matter and energy and astral planes and such. An interesting note is that Mr. Who's "Solution Z" cures all ills, can grow back lost limbs and even protect the user from death.

[Case of the Namesake Murders] (Table of Contents: 2)

The Black Knight (Table of Contents: 4)

The second page's illustration is a flopped blow up from the one on the first page to create a close up of the character depicted. The signature is left off.

[The Vanishing Menaces] (Table of Contents: 7)

Genre
superhero
Characters
The Spectre [Jim Corrigan]; Rhodes (introduction); un-named Police Chief; Clarice Winston; Matt Tyler (famed explorer); Morton Kirk (scientist, death); Percival Popp (one panel cameo-next issue promo); Nat Rhodes (villain, Kirk's assistant, death)
Synopsis
The Spectre comes to the aid of a scientist who has been captured by his own assiatnt, who wants to obtain Kirk's invention of a space-folding machine, which can transport anything from one spot on the earth to another in an instant.
Reprints

[The Submarine Strikes] (Table of Contents: 8)

Genre
superhero
Characters
Aquaman (introduction, origin); un-named father of Aquaman; the Nazis (villains, one dies)
Synopsis
An unnamed scientist and explorer uses the science of ancient Atlantis to give his son the power to breathe underwater, and he uses this and other gifts to battle evil in the world.
Reprints

Neither Aquaman or his father are given names in this story.