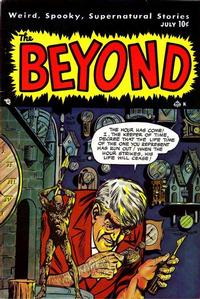 Genre
horror-suspense
Synopsis
Mysterious Countess Barovna joins the circus. She is an age-old vampire and kills off all the other acts to be the main act. In the end she gets staked and sent to her grave.
Reprints

True Tales of the Supernatural #9 (Table of Contents: 2)

Genre
horror-suspense
Synopsis
"The year was 1907. In a western mining town..."
Business intrigue gets innocent man hanged. In the following months, the guilty perish under mysterious circumstances.

The Frenzy of Sheila Lord (Table of Contents: 3)

Genre
crime
Synopsis
Having murdered her first husband (and gotten away with it), beautiful Sheila Lord falls in love again. The new lover begins to change his physique and resembles the former husband more and more. Sheila freaks out, and as her new husband falls acidentally to his death, she is convicted for a murder she didn't commit.
Reprints

True Tales of the Supernatural #10 (Table of Contents: 4)

Genre
crime; fantasy-supernatural
Synopsis
"If you should pass through the New England town of Salem..."
Father of the bride kills lover of his daughter in a rage. The girl dies of broken heart and spooks through the house.

Enigma of the Unscheduled Passenger (Table of Contents: 5)

Genre
crime; fantasy-supernatural
Synopsis
Lucinda Dell meets stranger on a train. When he gets off, he leaves his wallet. The woman investigates. A murder mystery unravels. In the end the wrongdoer gets exposed.
Reprints

ENIGMA OF THE UNSCHEDULED PASSENGER is a retelling of a segment of "Four Star Playhouse" called "The Man on the Train" which was telecast 15 Jan. 1953 a year prior to the magazine date. The role of Lucinda Dell is played by David Niven as a London businessman who meets a stranger on the train. Also, Daniel Cohen authored "Railway Ghosts and Highway Horrors" which also includes this story, so says IMDB. This episode is also on the DVD collection "Four Star Playhouse, Volume One."

The Leech Killers (Table of Contents: 6)

Genre
horror-suspense
Synopsis
Pirates fight out an old quarrel, including the application of blood-sucking leeches.

The Demons of Walpurgis Mountain (Table of Contents: 7)

Genre
horror-suspense
Synopsis
Karl Polter, a deformed artist, loves the town belle by the name of Bertha. Being shunned by the village people, he swears revenge and calls upon the spirits of Walpurgis Mountain. Vested with the powers of a werewolf, he goes on a killing spree. But is brought to justice in the end.