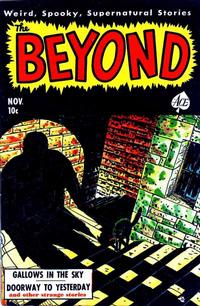 The Doorway to Yesterday (Table of Contents: 1)

Genre
horror-suspense
Synopsis
While staying in Rome, american newspaperman Wilson follows a beautiful stranger through the ruins and enters the "doorway to yesterday". He finds himself in ancient Rome and (at the command of Nerissa) has to battle a gladiator. Wilson wins and can return to the present. Nerissa follows and claims his body in an airplane crash.
Reprints

Some differences in reprint are made. Page 2 panel 3 is changed from word balloons to top captioning. CODE CHANGES: Page 5 panel 5 kill to strike. Page 6 panel 1 is dead to is lost, panel 2 dead to done, panel 5 death to doom. Page 7 panel 2 death's head ring is changed to strange ancient ring, panel 3 red outfit is blue, panel 4 it crashes becomes "the plane has to make a forced landing, panel 5 is redrawn from showing the man's dead body and the pilot stating "only one man killed..in such a strange way..his neck was broken as he was hurled forward..his safety belt was defective!" to the man holding his head the pilot says "only one man injured...only stunned..no bones broken...A most unusual kind of accident..his safety belt was defective!" Death's head is changed to ancient symbol. Last panel adds "Was this just a routine accident that frightened the stewardess to flight and Hank's episode a figment of his mind... or could there be another significance."

The Dead Guard the Gold (Table of Contents: 2)

Genre
horror-suspense
Synopsis
Treasure hunter Kramer gets pulled into an underwater world where ghost pirates dwell. The pirate's girl shows him a way out and Kramer can escape. He settles down and gives up treasure hunting for good.

Gallows in the Sky (Table of Contents: 3)

Genre
horror-suspense
Synopsis
Landowner Sir Edward drives a family off his property. Leaving they curse him as his whole family line has been cursed. Sir Edward begins fantasizing a blazing gallows in the sky no one else but him is able to see. The apparition transports him to the hanging tree, where he is found dead.

True Tales of the Supernatural #13 (Table of Contents: 4)

Genre
non-fiction; fantasy-supernatural
Synopsis
"Shipping off the coast of England in the late 19th century was a risky and perilous task..."
The ghost of a young woman saves ships by lighting a lantern at night and signaling danger.

Genre
horror-suspense
Synopsis
The travel liner "Arcadia" goes down off the coast of New York. A husband and his wife struggle against drowning and experience wild fantasies. A creature named Zrynyi strangles them. They are rescued, Zrynyi lying dead beside them. Wild visions - or were they?!

True Tales of the Supernatural #14 (Table of Contents: 6)

Genre
non-fiction; fantasy-supernatural
Synopsis
"Mountain climbers from all parts of the world make yearly trips to Switzerland to climb its most famous mountain, the Matterhorn..."
A young american loses his guide on the way up, but returns safely joining a group of others. These men have been missing for 20 years and are ghosts.

Creatures of Fantasy (Table of Contents: 7)

Genre
horror-suspense
Synopsis
A party of explorers discovers an underground world populated by cavemen and dinosaurs. They manage to defeat beasts and primitives and take a raft-ride on an underground river back to the outside world.