First Line of Dialogue or Text
You cannot escape me...
Genre
horror-suspense

Original art for cover auctioned on eBay was signed by Gene Colan. 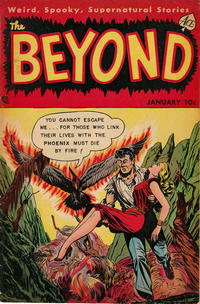 Curse of the Fire-Bird (Table of Contents: 1)

Genre
horror-suspense
Characters
Lydia; Professor Burnett Firey; Juan Dufue
Synopsis
When "ambitious" Lydia kills her husband with the stroke of a mace to inherit his fortunes, he changes into a phoenix and hunts her down to a fiery end.
Reprints

True Tales of the Supernatural #35 (Table of Contents: 2)

Genre
fantasy-supernatural
Synopsis
"The people in a small town of France still tell the story of a little hunchback..."
When the hunchback witnesses a robbery, he gets stabbed to death by the criminal. But his ghost rings the church bells and alarms the town.

Genre
horror-suspense
Synopsis
Newspaper reporter Jerry Vincent takes on a night job for a creepy man with a hood sitting in a room full of torture instruments. Vincent writes story beginnings about actual events. Mr. Todt writes the endings. Todt is Death. And everything Vincent writes about turns into a catastrophe. Finally Vincent too has to pay with his life.

There is a hidden signature on the newspaper in the splash: "Sy Grud..."

The Hand of the Ancient Evil! (Table of Contents: 4)

Genre
horror-suspense
Synopsis
Dick Adams comes upon a Chinese box containing a withered hand fulfilling wishes. When Adams gets careless in his wording ("I wish I had never laid eyes upon you" / "I wish that I were dead"), the hand first tears out his eyes and then strangles him.

And yet another variation of the horror classic "The Monkey's Paw" by William Wymark Jacobs (published in 1902).

True Tales of the Supernatural #36 (Table of Contents: 5)

Genre
horror-suspense
Synopsis
"Late in the nineteenth century, a strange death was recorded in the files of the London police..."
British explorer is hit by mummy's curse for pillaging an Egyptian tomb.
Reprints

A Sporting Chance (Table of Contents: 6)

Genre
horror-suspense
Synopsis
In a German castle, three hunters meet a vampire and agree upon a game of life and death. The vampire, Baron von Fledermaus, hunts down and kills the first two, but the third can defeat the vampire - because he is a ghoul.

The Scourge of the Undead (Table of Contents: 7)

Genre
horror-suspense
Synopsis
Convicted killer Jules Scholler dies in the electric chair, but lives on as a zombie - kept alive by "the evil spirit of those who fear death", a death-like figure in a fancy hat. Mentoring him along the way, Scholler goes on a crime spree. When his body starts to rot, the spirit commands him to dispose of himself in the city garbage dump.