Starring the Mighty...Thor! The Most Colorful Super Hero of All!!! (Table of Contents) 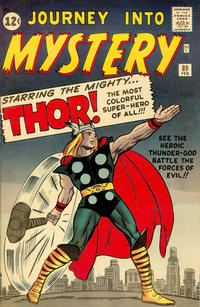 The Thunder God and the Thug! (Table of Contents: 2)

From Outer Space (Table of Contents: 3)

Job Number
[9498]
First Line of Dialogue or Text
It had been expected for a long time, so it wasn't too much of a shock when the first visitors from outer space made contact with the world.
Genre
science fiction
Characters
Jonathan Ditmar
Synopsis
When hostile aliens come to Earth of the future they are persuaded not to enslave humanity because of Earth's music.
Reprints

Text story with illustration. First page is located between pages 5 and 6 of previous story sequence. Second page appears between the comic stories “Barker’s Body Shop!” and “When the Switch is Pulled…”

To Men who Want Big Money but Don’t Know How to Get Started (Table of Contents: 4) (Expand) /

Job Number
X-30
First Line of Dialogue or Text
If you want to know how it feels to make the biggest mistake of your life, then mister, just ask Carl Barker!!
Genre
science fiction
Characters
Carl Barker
Synopsis
A crooked mechanic hires a drifter to customize a car, promising enough money for him to get home. When he refuses to pay the man the drifter takes the car instead, which he converted to be able to fly him home to the stars.
Reprints

First Line of Dialogue or Text
Tell us honestly--do you believe it will ever be possible to travel in time??
Genre
science fiction
Characters
Dr. von Richter; Ludvig
Synopsis
A time machine seems not to work, but actually travelled in a complete loop through time back to its point of origin.
Reprints