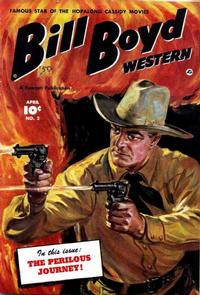 Genre
western-frontier
Characters
Bill Boyd; Topper (horse); Sheriff Graystone; Hank Parr (outlaw)
Synopsis
Bill is tricked into helping an outlaw to escape from the posse, and is himself put in jail suspected of being a member of the outlaw gang. He escapes from jail and joins up with the gang to catch the outlaw.

Pete Riss is credited on pencil and ink on Bill Boyd by Jerry Bails' Who's Who, and the inking seems similar to his credited stories on "Kid Eternity", but few of his wedge shaped faces with eyes far apart, as in most of his credited stories in "Adventures Into the Unknown", are present in this story. The horses with large, square snouts and extremely large hooves, are identical to the horses in 4-5 issues in this series. Only Riss and Elkan are credited on Bill Boyd, so these stories could either be Riss, or some other uncredited artist. He had more realistic horses in 1953 than here.
Bill Boyd's black horse is called Midnite in the first issue, here it is Topper, and has a light blue color.