The Missing Exit (Table of Contents) 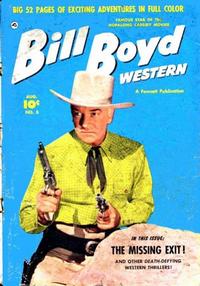 The Missing Exit (Table of Contents: 3)

A Real Dummy (Table of Contents: 4)

Dress Up Just Like Hopalong Cassidy (Table of Contents: 5) (Expand) /

The Ominous Door (Table of Contents: 8)

Genre
western-frontier
Characters
Bill Boyd; Midnite (horse); Zeke Rayburn (rancher); Jack Rayburn (nephew); Gladstone (crooked lawyer); Sheriff
Synopsis
The old dying rancher puts all his money in a suitcase, leaves it inside a deserted house and attaches a sign to the door, saying that behind the door lies a surprise of fame, fortune or death.
Reprints

Tomsey is credited on westerns for Fawcett by Jerry Bails' Who's Who, and some square jawed faces, and movements looks like his credited work on "Lance O'Casey" in Whiz Comics #134 and #136. Probably his work.

The Death Brand (Table of Contents: 9)

Genre
western-frontier
Characters
Bill Boyd; Midnite (horse); Brad Allen (robber and killer); Blacksmith
Synopsis
An accidental brand on a horse turns out to be a clue to the killer of the hotel clerk.
Reprints

Treasure in the Shack (Table of Contents: 10)

The Moving Story (Table of Contents: 12)

Bumpy Road Ahead (Table of Contents: 13)

The Midnight Marauders (Table of Contents: 14)

Same artist as on the "Smiley Burnett" story in "Six-Gun Heroes" #3, with very marked lines on the cheeks.