Trails of Death (Table of Contents) 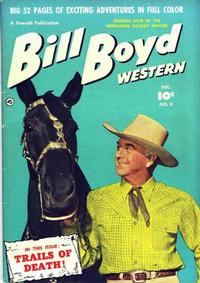 Trails of Death (Table of Contents: 1)

In the Swim (Table of Contents: 2)

Genre
western-frontier
Characters
Bill Boyd; Midnite (horse); Hastings (gang boss); Sheriff
Synopsis
A gang of counterfeiters are making silver dollars, only they are lead and zinc with a thin coat of silver.

Elkan is credited on pencil and ink on Bill Boyd by Jerry Bails' Who's Who. He can be spotted by the faces, and long hair in the neck and under the hat in front. The horses are much more realistic than the ones credited as uncertain to Pete Riss.

The Schoolhouse Mystery (Table of Contents: 5)

Tomsey is credited on westerns for Fawcett by Jerry Bails' Who's Who, and some square jawed faces, and movements looks like his credited work on "Lance O'Casey" in Whiz Comics #134 and #136. Probably his work. Artwork similar to "The Ominous Door" story in Bill Boyd #5.

An Easy Touch! (Table of Contents: 6)

Windy and the Potato Bugs (Table of Contents: 8)

The Peace Pact (Table of Contents: 9)

Genre
western-frontier
Characters
Bill Boyd; Midnite (horse); George Hagen (government agent); Chief Hannu; Indian Agent; Ruma (villain)
Synopsis
A government agent has stumbled onto a plot by Ruma to take to the warpath, and is being killed before he can report it.