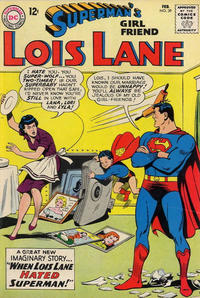 The Girl Who Hated Superman! (Table of Contents: 2)

Genre
advocacy
Synopsis
How to treat frostbite, a black eye, and does cutting your hair make it grow faster?

Published in cooperation with the National Social Welfare Assembly.
Previously appeared in some November 1962 DC titles; later appears in May 1966 titles.

Genre
superhero
Characters
Lois Lane; Clark Kent [also appears as Superman]; Lana Lang; Perry White
Synopsis
A doctor advises Lois that her feelings for Superman are endangering her health and she should transfer her affections to another man, so she chooses Clark.

First Line of Dialogue or Text
Oh, officer! There's a man in my store who I believe is shoplifting!
Genre
humor
Characters
Casey

The Kryptonian Courtship! (Table of Contents: 10)

Genre
superhero
Characters
Lois Lane; Lucy Lane; Supergirl; Superman; Lori Lemaris; Krypto; Jor-El (flashback); Lara (flashback)
Synopsis
Supergirl gives Lois a Kryptonian invention that enables her to watch the courtship of Jor-El and Lara as it happened, and Lois decides to copy what worked for them as she pursues Superman.
Reprints