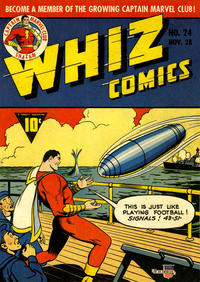 The Secret of the Ring (Table of Contents: 1)

The last 1/3 of the last story page is an illustrated advertisement for Captain Marvel Adventures.

The last story panel alwerts readers that Captain Marvel will face Captain Nazi in the next issue.

A Cop's Revenge (Table of Contents: 3)

[Island of Cannibals] (Table of Contents: 5)

[Christmas with Half-Man] (Table of Contents: 8)

Genre
fantasy-supernatural
Characters
Ibis; Half-Man (villain, reforms in this story); Adolf Hitler (villain); the Nazis (villains)
Synopsis
The Nazis find themselves in real trouble when they seize control of the Ibistick.......and then suffer the consequences.
Keywords
Ibistick