The Metal Master! (Table of Contents)

First Line of Dialogue or Text
Even your limitless strength cannot save you from me, Hulk!
Genre
superhero
Characters
Hulk [Bruce Banner]; Metal Master
Reprints 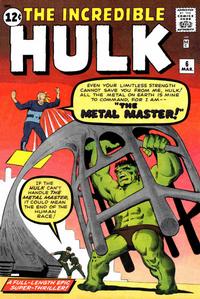 The Incredible Hulk vs The Metal Master! (Table of Contents: 2)

Job Number
X-116
First Line of Dialogue or Text
What happens when a living being whose incredible might is almost beyond measure meets a menace from another world -- a menace whose power cannot be halted by mere brute strength??
Genre
superhero
Characters
Hulk [Bruce Banner]; Rick Jones; Betty Ross; General Thunderbolt Ross; Teen Brigade (introduction); Metal Master (introduction, villain)
Synopsis
Finding his transformations more and more difficult using his gamma ray machine, the Hulk with Banner's brain also finds that he has Banner's features when he zaps himself to face the alien invading Metal Master and his head does not transform. The power of the Metal Master is too much for the Hulk and he is captured by Ross. Rick forms the Teen Brigade. Hulk breaks free of Ross's bunker and then pulls off one of the boldest victories against one of the most powerful aliens ever seen.
Reprints

Job number from Tom Lammers and Ger Apeldoorn via the Atlas/Timely discussion group. Script credit provided by Stéphane Petit via the GCD errors list in an email dated November 28, 2007.

Printed between story pages 19 and 20.