Distributed to newstands in January 1963. This issue includes 10 pages of paid advertisements.

First Line of Dialogue or Text
In another second you will be eternally trapped in a block of unbreakable ice!
Genre
superhero
Characters
Thor [Doctor Donald Blake]; the Carbon-Copy Man [Zano]
Reprints 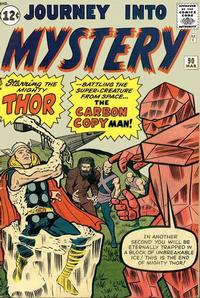 Trapped By the Carbon-Copy Man! (Table of Contents: 1)

Job Number
[H-396]
First Line of Dialogue or Text
There was something peculiar about the old Catlett estate.
Genre
science fiction
Characters
Sam Catlett; Caspar; Ben Rump; Bill Rump
Synopsis
A local millionaire secludes himself from his old bowling buddies as he becomes wealthier, but they discover that he misses them so much that he has invented a robotic bowling alley.
Reprints

The Midnight Caller! (Table of Contents: 3)

First Line of Dialogue or Text
Many things can be hidden behind an iron curtain!
Genre
fantasy-supernatural
Characters
Hans; Anna
Synopsis
In a communist bloc country, a fugitive seeks shelter from an elderly couple who grant it to him. The next day they find their shack has been transplanted outside of the iron curtain and repaired to look as new. They regard the event as impossible but their guest says he was merely repaying the kindness shown to a stranger and is revealed to be an angel who was traversing the communist-occupied country for an unknown reason and then he ascends back to heaven.
Reprints

This shares the last page of "Mystery Mansion".

First Line of Dialogue or Text
Observe my newest mechanical man in action, gentlemen!
Genre
science fiction
Synopsis
A criminal steals an advanced robot and uses it to rob a bank, but when he orders it to guard the door of his hideout an error in wording traps him inside permanently.
Reprints

Narrated in the first person by the robot.