The Threat of the Torrid Twosome! (Table of Contents) 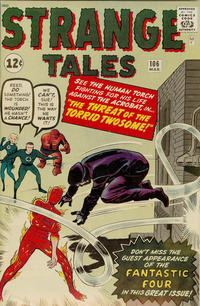 The Threat of the Torrid Twosome (Table of Contents: 1)

The Acrobat next appears in issue #114 (November 1963). This is the first appearance of Johnny's obstacle training course and the last story in which Johnny worries about having a "secret identity".

The Recipe (Table of Contents: 2)

Job Number
K-338
Genre
fantasy-supernatural
Characters
Josie
Synopsis
A tomboyish girl tries out cooking to appease her mother, but accidentally cooks a witch's brew, totally inappropriate for a fairy like her.
Reprints

Man on the Scaffold! (Table of Contents: 3)

First Line of Dialogue or Text
Willie Wopper was a teller of tall tales!
Genre
fantasy-supernatural
Characters
Willie Wopper; Sam; Charlie
Synopsis
A teller of tall tales becomes the butt of some ribbing when he tries to tell his fellow painters that he has acquired some magic paints. When the cable of the scaffold they are working on breaks, the advertising poster the men were painting in comes to life and lowers them to the ground. The amazed painters feel they owe their lives to the magic paint, but the painter is smug in the knowledge that the scaffold never really fell but his paint allowed him to hypnotize his coworkers into believing it did and that they were saved by the poster.
Reprints

The Mystery of the Purple Planet! (Table of Contents: 4)

Job Number
X-63
Genre
science fiction
Characters
Bentley
Synopsis
A space expedition is sent to a distant planet when it is suddenly covered with an artificial mist. The team finds gold and takes it, but are transformed into aliens like the inhabitants.
Reprints