The on-sale date is from Marvel's press release as published in "The Comic Reader" #13. The date matches the publication date reported in U. S. Copyright Office filings as listed in the Catalog of Copyright Entries, Periodicals, January-June 1963, page 173, registration number B12121. 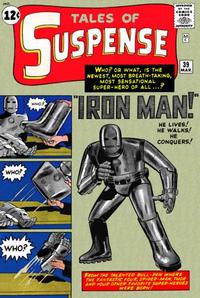 This is the first Iron Man story.

The Treasure (Table of Contents: 2)

The Last Rocket! (Table of Contents: 3)

This is a retelling of "I Am the Last Man on Earth!" drawn by Don Heck in Strange Worlds (Marvel, 1958 series) #1 (December 1958). Script and letters credits from George Olshevsky's Marvel Comics Index.

First Line of Dialogue or Text
Take one lone man, shipwrecked on a strange isle...
Genre
horror-suspense
Characters
Gundar
Synopsis
A shipwrecked man finds cursed viking ghosts on an island, and his descent from the captain that cursed them releases them.
Reprints