Prisoner of the Slave World! (Table of Contents)

First Line of Dialogue or Text
I've only seconds in which to act and no place to turn!!
Genre
superhero
Characters
Ant-Man [Henry Pym]
Reprints 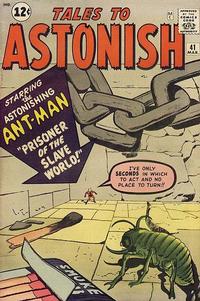 Prisoner of the Slave World! (Table of Contents: 1)

First Line of Dialogue or Text
If you were Henry Pym, you could never predict when you might run into adventure!
Genre
superhero
Characters
Ant-Man [Henry Pym]; Ben (Scientist); Carter (Scientist); Paul (Scientist); Ed Marion ('window washer', named in Marvel Legacy: The 1960s Handbook); Warlord Kulla
Synopsis
Henry Pym is kidnapped along with other scientists in order to build a super-weapon for a tyrant in another dimension. He sneaks away and transforms into Ant-Man in order to defeat the tyrant.
Reprints
Keywords
Ants

In Marvel Legacy: The 1960s Handbook, this dimension is called Dehnock.

Job Number
[K-19]
First Line of Dialogue or Text
It was unbelievable to hear Eli Twiddle tell his customers at the Travel bureau about the...
Genre
fantasy-supernatural
Characters
Eli Twiddle; Mr. Hardy
Synopsis
A travel agent has the ability to travel in his dreams, but eventually he grows out of it.
Reprints

When the Beast Walks! (Table of Contents: 3)

Job Number
X-42
First Line of Dialogue or Text
They started closing up the zoos in 1965 and now they're all shut down!
Genre
science fiction
Characters
Bruno Storme; Shorty Harris
Synopsis
An animal-loving reporter saves a four-armed ape from a hunter and discovers that it is really an alien looking for a human worthy of hearing its message. As a gesture of goodwill to other species all zoos on Earth are shut down.
Reprints

First Line of Dialogue or Text
Hah! Look at the ignorant peasants run!
Genre
horror-suspense
Characters
Sebastian; Vulture
Synopsis
A dictator pretends that a treasure is cursed in order to get it for himself, but it turns out the treasure is cursed and a ghost takes him.
Reprints