On-sale date from ad in Strange Adventures #150 and copyright registration.

The Highwayman and the Mighty Mite! (Table of Contents) 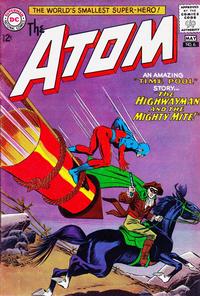 The Riddle of the Two-Faced Astronaut! (Table of Contents: 2)

Genre
superhero
Characters
The Atom [Ray Palmer]; Jean Loring; Wizardo the Great; Chief Baxter; Peter Venner; Howard Crane (villain)
Synopsis
Ray Palmer's old friend Wizardo uses an assistant dressed as an astronaut in his magic act, but when it appears that the astronaut is using the magic act as a cover for burglary the Atom must figure out the truth.
Reprints
Keywords
stage magic

The Highwayman and the Mighty Mite! (Table of Contents: 8)

The Brave and the Bold; Strange Sports Stories / promo (ad from the publisher) / 0.33 page (report information)

Salute to Our Fellow Citizens of Puerto Rico! (Table of Contents: 10)

Genre
non-fiction; advocacy
Synopsis
information about the Commonwealth of Puerto Rico and brief profiles of famous people from there